THE BOOKS OF RED SHUTTLEWORTH 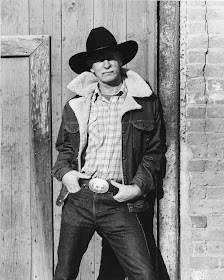 The Books of Red Shuttleworth 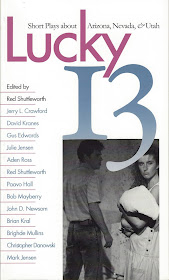 With encouragement from Tom Radko (Director of the University of Nevada Press in the 1990's) and William L. Fox (Director of the Nevada Arts Council in the 1990's), I edited Lucky 13, an anthology of regional plays.  The short form is tough, but it offers thrills. Some of the plays in Lucky 13 are less than memorable, but over half of them are splendid and, twenty years after publication, still ought to be produced.  Lucky 13 is out of print, but one can find copies on Amazon. 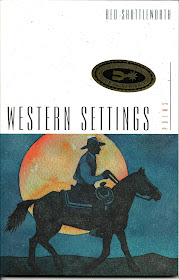 Although I began writing poetry in 1967 and had been publishing in fine journals since 1973, and although I was able to get a few chapbooks published and had been a finalist in over half of the very competitive book publication competitions, by the 1990's it looked like my poems would never gain book publication... and not with a university press.  But Tom Radko at University of Nevada Press took a chance. Radko hired Bill Fox to work as my editor on cobbling together a coherent book that had an arc, and Western Settings appeared in 2000.  It held poems that had first publication in some fine journals, including Ontario Review, Prairie Schooner, and West Branch.  In 2001, Western Settings received the first Spur Award for Poetry from Western Writers of America.  Before too long, True West reprinted a poem from the book... the only time that magazine has ever published a poem in its print edition. Western Settings is out of print.  Sadly, the University of Nevada Press, after the tenure of Tom Radko, hired a quintessentially stupid director and she killed the poetry program entirely.  Readers who wish to own Western Settings can locate used copies on Amazon. 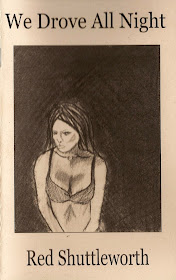 More chapbook than book, We Drove All Night is the only chapbook or book that I have not campaigned for.  I include it here only because it was, until mid-December, 2015, available to readers via Amazon. It is a fine collection of poems, sure, but Finishing Line Press (I learned after they accepted this work for publication) is a vanity press run by shit-heels. 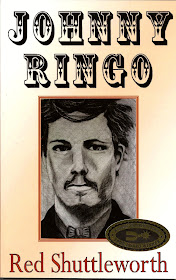 The Old West pistolero who most reminds us of the mad Roman emperor Caligula was Johnny Ringo.  His craziness was fascinating.  Ringo is famous yet, or infamous, but he is of little historical import.  He was NOT at the gunfight at OK Corral.  Ringo is NOT central to any vital history.  But Ringo was hilariously mad, a goof, a drunkard, a man with inclinations so violent, yet posted against a singular view of Christian theology, that I could not help but write a book-length poem that followed his failed life.  I tried to write Johnny Ringo as if it was a poem that Samuel Beckett could write if someone other than Beckett was writing it.  When the poem was written, I could not imagine any publication that could publish it in its entirety.  Through facebook, though, I was befriended by Yoly Fivas.  Yoly was using CreateSpace (print-on-demand) to publish books.  And she, through her Riverhouse Lit imprint, published Johnny Ringo, winner of the 2013 Spur Award from Western Writers of America for Best Western Poem.  To this day, Johnny Ringo enjoys sales spurts on Amazon. 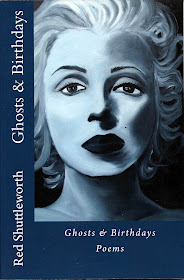 Emil Cioran loved reading biographies, because it was entertaining and instructive to learn what delusions and illusions of youth came to at the end of men's lives.  For years I had been writing bio-sketch poems (Mikhail Lermontov, Wyatt Earp, Georgia O'Keefe, Waylon Jennings, and many others) which were published in wonderful journals, like Blue Mesa Review, Chattahoochee Review, Concho River Review, and Los Angeles Review. A friend, journalist Kris Wetherholt, was starting a press... and Kris' Humanitas Media Publishing issued this collection in 2012... with a painting of Marilyn Monroe (by my daughter Ciara Shuttleworth) on the cover.  Ghosts & Birthdays is available on Amazon. 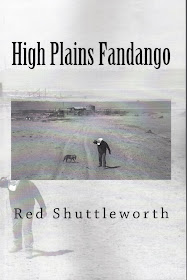 Commissioned and first produced by The State University of New York at Fredonia, with a development reading by the Echo Theater of Los Angeles, High Plains Fandango, a play about water scarcity and aquifer privatization, premiered at SUNY-Fredonia (directed by Tom Loughlin) on February 24, 2012.  Given publisher/journalist Kris Wetherholt's commitment to coverage of global stress points/conflict, she graciously offered to have her Humanitas Media Publishing bring out this play in a fine paperback edition (with a cover photograph by Ed Kashi)... so that perhaps other theatres, both professional and academic, might produce it again. 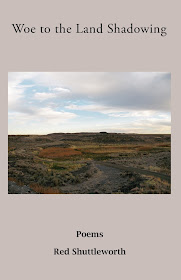 The fire season of 2015 in Washington State was the worst in history.  Out of the daily smoke and threat of wildfire came the poems that comprise Woe to the Land Shadowing.  Poets Jeff and Tobi Alfier (who run Blue Horse Press and a fine literary journal, San Pedro River Review) offered to publish these poems.  And Blue Horse Press rapidly issued the book. Woe to the Land Shadowing received the 2016 Western Heritage (Wrangler) Award for Outstanding Poetry Book (from the National Cowboy & Western Heritage Museum). 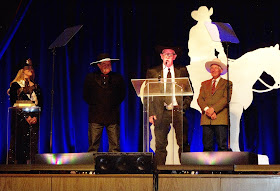 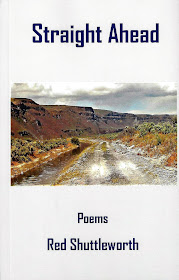 Straight Ahead (Blue Horse Press, 2017) presents a dozen poem sequences that first appeared as chapbooks from Bunchgrass Press. The book concludes with a suite of Western poems that might remind readers of Red's Western Settings. 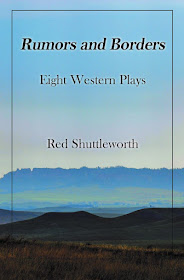 Rumors and Borders (Humanitas Media Publishing, 2017) is a revised version the collection of one-act plays that was to have been published by University of Nevada Press years ago.  There was an oral promise of publication from Nevada, but a new director came aboard and that university press killed its poetry series and choked-off any interest in publishing drama.  The eight plays in Rumors and Borders have been presented widely. 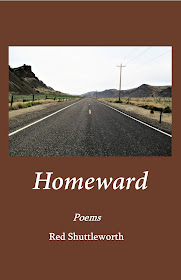 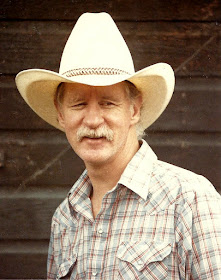