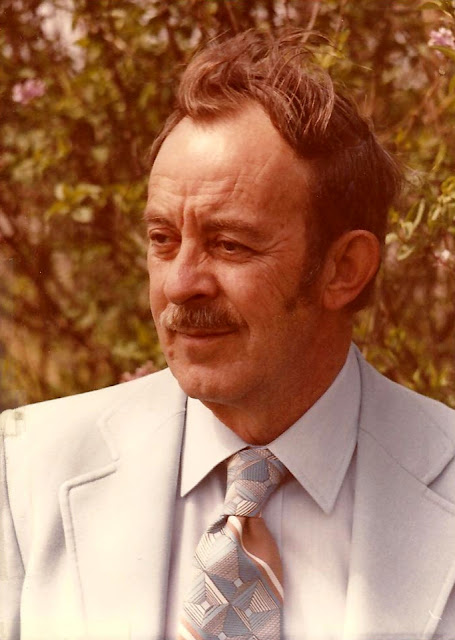 Norman H. Russell
March 1981
Fairbury, Nebraska
Norman H. Russell
No poet saw more of his poems appear in literary journals between 1970 and 1985 than Norman H. Russell.
News was carried to me recently that Russell died on May 14th of this year at age 89.
An internationally respected botanist, Russell began his poetry career relatively late... in his late forties... after taking a teaching post at Central State University in Edmond, Oklahoma.  He had made his name as an expert in the violet.  Although Russell had been a devoted reader of poetry, he only felt the impulse to write his own poems after  becoming a regular patron of the public zoo in Oklahoma City.  The first poems were about those zoo animals.  But soon Russell was writing out of his Cherokee ancestry. 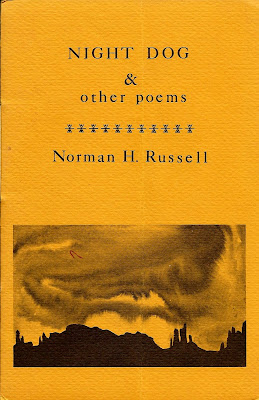 Night Dog and Other Poems
by Norman H. Russell
(Cottonwood Review, 1971)
Norman H. Russell's poems appeared in, literally, hundreds of magazines.  Some of them were dreadful.  Russell didn't seem to care.  He wrote a batch of poems... he sent out a batch of poems.  New journals appeared every month.  There were dozens of new journals launched every month in the early seventies.  Anybody within a few miles of a Xerox machine could start a magazine.  Most of those magazines died early. Some were good, a few were great, most were packed with mediocre-at-best poetry.  Russell did not appear to care about a magazine's reputation. 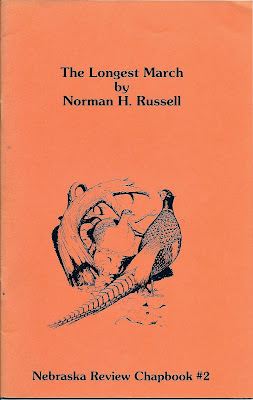 The Longest March
by Norman H. Russell
(Nebraska Review Chapbook, 1980)
Norman H. Russell, writing out of his sense of himself as Cherokee and  humanist, wrote jewel-like poems... incantations toward reconciliation of man with nature.  Many young poets of the seventies admired Russell... he was a hero of poetry.  The Literati, though, were not quite prepared to adore, much less offer respect and homage, to Russell or his poems.  Perhaps Russell was too prolific, made writing great poems seem too easy, for the literary establishment.  The bastards of the Literati never fully embraced Norman H. Russell... no more than they embraced, for instance, Charles Bukowski.  Russell did not seem to care.  He sent his poems out... magazines published most of them. More than a dozen Norman H. Russell chapbooks and books appeared
Luckily I came to know Russell's work and eventually became friends with him.
In the early eighties, he got me a poetry reading at Central State University, where he was vice president for academic affairs.  I stayed with Russell and his wife, Arline, and we had a grand time.  Russell saw that I carried, as was my habit in those days, a sack of baseballs and a couple of gloves and two or three Louisville Slugger bats in the trunk of my car.  I was in my thirties.  Russell was decades older than me, but he insisted on playing catch.  So there we were on Thrush Circle in Edmond, Oklahoma, tossing a baseball back and forth for half an hour, talking poetry.  Russell had a fine arm, even at age 59, and moved fluidly and received the ball with soft hands.  We played catch... not fetch.
His Edmond neighbors were not so happy that Russell had turned against mowing his property... had restored it to its natural state, encouraging local rattlers and coyotes and deer to live beside him... and near his nervous neighbors.
Norman H. Russell bushwhacked a trail for many Native American poets.  He was the first Indian to publish poetry widely.  He supported the growth of many poets, Indian and non-Indian, and helped more than a few gain publication.  Norman H. Russell was extraordinary in his generosity toward young poets... including me.
One can only hope, with the passing of Russell, an appropriate university press will take on the assembling and publication of a large collection of Norman H. Russell's best poems. 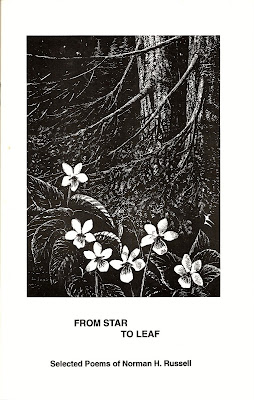