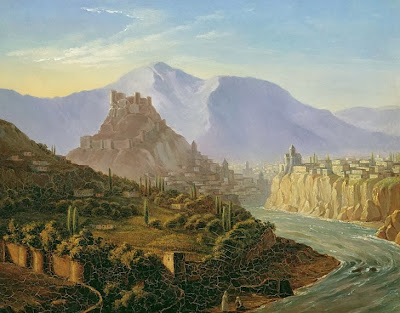 Drowns years later     (sequined organdy)
under the weight     of her horse.

When this pre-dawn poem-portrait is forgotten.
when the Bowie-torn shirt of yesterday is burned
out back with pine branches and rotted alfalfa bales...
when the luckiest stars have sparked across the enduring sky,
when the last cafe waitress has grappled for what can substitute
for love, let me fade like crushed rock into bad-crop-year ground.

All the great dead poets offer marble-white smiles.
All the mistresses of colonels and poets and fragile boys
offer dipped-in-chocolate kisses... but not here and not today.
All the great dead poets walk transparent through my sage steppe,
sing choked-off salty poems of pistols and unfaithful lovers:
good goddamned grief, Lermontov, you don't pull the trigger...
only daydream --in the middle of a duel-- that the paintings,
merely a handful, and the poems, will make some difference?
Oh, the sunlit morning gunsmoke and the fuzzy green distant trees...
and no desire to return to that small cottage, its pens, its filthy socks,
its empty vodka bottles, its fallen, syphilitic princess waiting for  you....

So I am drinking toward dawn on an American Thanksgiving Day
when the soul-diseased prepare to annually feast-an-insult
at the Mohawk, the Lakota, the Paiute, the Apache...
with turkeys washed in their own blood, pus, piss, and shit.
I am drinking like Yesenin, like Berryman, and I am
just as Caligula-mad as Lowell, but with half the gift
to make words into bitter salt to burn the nation's greed
for Black Friday bargains and flail-later-debt
to cigarette-stench bankers and hope-faded Romneyites.

~
I am drinking... singing lust-transparent songs
of low-cut prom gowns, homecoming queen breasts...
songs to crippled-fish rivers, songs of film noir and Western
movie blondes with cigarette-sexy, husky voices
silenced long, long-fucking-ago by the canned laughter
of church ladies and their thorn-eyed flaccid-dick husbands,
silenced by the steamed fat-boy shirts at evangelical TV
who hallucinate a seventy-foot-high Jesus taking notes
on whose been good and who's been bad.

The gardens of the poor offer no relief.
There's been a hellish drought.
The gravy has dried flies in it.
Today's turkey, greasy drumstick and dry white meat,
offers indoor pioneer West land-office business,
in emergency rooms... from Hilton Head
to Dodge City, from Glenwod Springs to Hollywood,
heart attack pumpkin pies with canned-stroke whipped cream.

Posted by Poet Red Shuttleworth at 6:03 AM No comments: 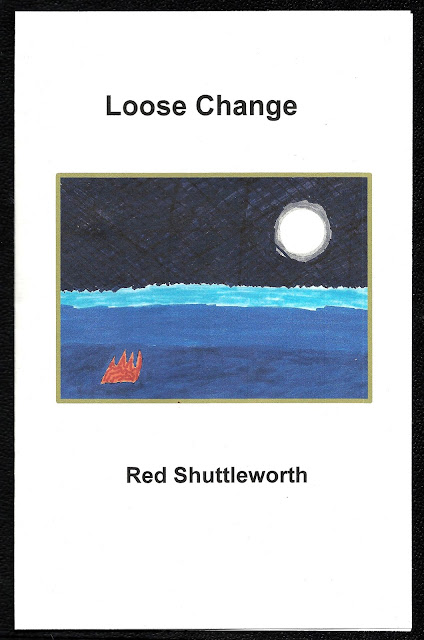 Loose Change started out as a Nevada short story and transformed itself into a poem.

Posted by Poet Red Shuttleworth at 5:59 PM No comments: