THE GHOST OF OSSIE VITT: A Red Shuttleworth Poetry Chapbook 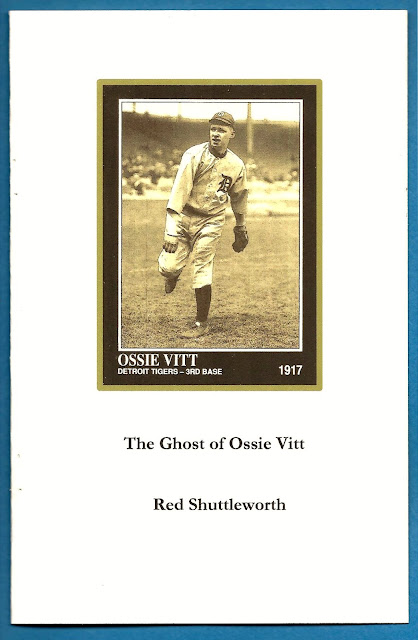 The Ghost of Ossie Vitt

a one poem chapbook

In the course of working on a book-length manuscript of poems based on the "Happy Birthday" and "Ghost of..." poems, plus the bio-sketch poems from the Brief Lives chapbook, it seemed that the Ossie Vitt poem was not going to make the cut... for various reasons.  But I like the poem....

So... The Ghost of Ossie Vitt is now available as a limited edition (44 numbered and signed copies) chapbook.

Decades ago, poet / watercolorist Jim Hubert and I went down to Palo Alto to visit Kenneth Patchen's widow, Miriam.  She showed us a few homemade, with beautiful painted covers, chapbooks that Patchen made from sheets of thin cardboard... the kind inserted at the backs of shirts by dry cleaning stores.  I believe that Miriam Patchen sold or donated her collection of Kenneth Patchen's homemade books to Stanford University.

In this ugly epoch of ebooks and ejournals put out by inelegant folks, literary phonies, it makes a kind of sense to rebel and put out, even by self-publication occasionally, a chapbook using good paper... if only for a few friends.

Having a blog is a kind of  cave-in to au currant technology, yes.  So I am not without literary guilt.

Ossie Vitt was a man of a far different age.  He was a tough old man when I met him.  He'd played on the Tigers with Ty Cobb.  Cobb and Vitt were old school baseball men.  By 1940, the boys who would be The Greatest Generation were too soft and spoiled for the likes of Ossie Vitt and Ty Cobb. Vitt's 1940 Cleveland Indians, including future Hall of Fame pitcher Bob Feller, whined to ownership about Vitt being a hard-ass manager, one quick to blame, one who never praised.  When I met Vitt, as a student at the San Francisco Examiner Baseball School around 1959, I taunted him about the Indians firing him.  He growled back... about my deplorable fielding.  Good days.  The poem, the chapbook arrive out of memory.  Rest in Peace, Ossie Vitt.