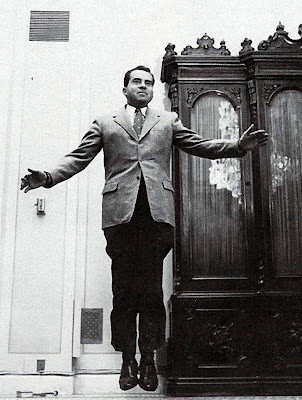 The waiter ushers Dick over to my table.
He appears to recognize me, Have you seen
my goddamned dogs, Checkers or Timahoe?
He's in a cheap suit and soup-stained tie.
I was walking them and they vaporized.
People are always trying to steal Checkers...
and Timahoe, well, only Henry Kissinger
wants him... for serious training.

Dick sits at my table, orders six gin and tonics,
What a time we'll have, just a rock 'em - sock 'em time,
once I get my sixer of smart juice.  Timahoe...
I love that red-coated garden pisser.
We used to get low and chew on the Oval Office rug.
One day I caught the bastard fucking with it....
and for a moment I was ready to napalm his ass.
And Kissinger says, "Mr. President,
if you don't reward him with dog biscuits,
then there won't be any carpet crumbs."

Dick lurches from his chair, dives to all-fours,
looks up at me, places a napkin on the floor,
and grips it with his teeth... shakes it.
Dick still has wiry dark hairs
growing from the top of his nose.

My porterhouse steak is getting cold, so I cut into it.
The waiter disappears.  Dick shakes the napkin with his teeth,
Goddamn, but Timahoe and I had good times
in the White House.  Once we saw the image of Jesus
in a bowl of Timahoe's canned dog food.
Another time we both pissed on a painting of FDR.
And when Elvis came and I made him a special agent
against drugs, I let him take Timahoe for a trot.

Abruptly, Dick sits back down in his chair,
You gotta help me find Checkers and Timahoe.
We were on a walk, talking to America.
It's vital that I remain within the heart
of this great nation's soul.  ﻿
Posted by Poet Red Shuttleworth at 12:40 PM No comments:

Like a Salt Lake City truck driver's sister
married to a motel's owner....

They used to preach in school,
You can't run off with some god's treasures.
Afternoon TV half-verified that.

And oh that lovin' kindness, she said,
that slap across the face at home
is what propels, you know, really triggers.

The light in the bar is pavement-gray.
The wine is for scratching our wits
to see if we can make-up a secret to share.

Yeah, baby, I don't mind thin lips
if they kiss back.  We're dividing malice clouds
to learn what choices we can take.
I like to call you Plenty-Chances-Taken-Angel:
and the harsh-hidden is our territory, baby,
rough as gritty cement on swing-shift-pale skin.

The July night dies like a ten-speed bike
crashing into a barn door.  All the lawn mowers
in town are screaming at each other.

On dim surfaces of hope and regret,
it's Mojave bad luck, our thirst for it,
that leads to roadkill bones and thorns
far from the jiggle of firm breasts
as you bubblebath-soak.

Or Salt Lake City is another made-up tale.
Or: tarnished barrel racing trophy
buckles tossed into the cow lot.
Or: momma's arrowhead collection.
If you hang on to whatever this is,
she says, I'll give you the very best
headboard concussion you've ever had.
Posted by Poet Red Shuttleworth at 12:08 PM No comments:

The harps of heaven are disgusting,
declaims Jane Austin who has just waltzed
Billy the Kid.  And her sublime body
harmonizes with his... however unlikely.

At nineteen Casey Tibbs is on the cover
of Life, but who the hell remembers
in these dumpster-years filled
with computers, populated
with soft-handed men
lashed to grey cubicles?

Lovers kiss on the hatch
into Sylvia Plath's grave...
recite haloed poems
they rhetorically give
their lives to... and Caligula
strokes his thin beard,
turns a brittle sheep-flesh page
as little girls and boys
feed him seedless grapes.

And Billy the Kid wipes
off his gone-soft dick
with a Progress is Our
Most Important Product ad...
and Marilyn, sweet Marilyn
giggles to Joe DiMaggio,
promises she will learn to cook.

And I piss off my front porch,
speak to little darlin' about how
the kids are on down the road
forever-for-now... and we have
so much to catch up with.
Posted by Poet Red Shuttleworth at 9:09 PM No comments:

Hurrying into the Horizon 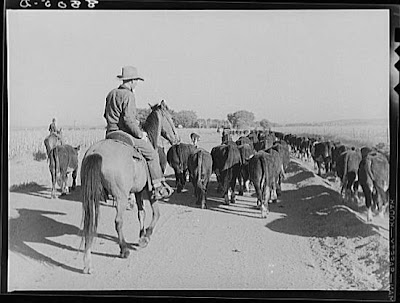 "Cowboy driving cattle to grazing land, Dawson County, Nebraska, 1938"
(A John Vachon photo)
Library of Congress
Hurrying into the Horizon
The three-night party,
all those barefoot people,
some half dressed...
and we vibrated...
and the sun did not
come up for three days.
Roundup was through.
Who would eat so much
steroidal beef?
You said, Never mind, honey.
We went to a barn dance...
lame 80's music for Omaha friends.
We slipped away sweaty,
tucked in the kids,
sat on the front porch
with cool bottles of beer.
The moon had not
gone down in days.
We shucked our best jeans
and snap shirts, weighted themn
with boots on a mowed patch
of grass and weeds.
We stepped into our new
stock tank naked
and the moon went from orange
to the color of corral boards.
This poem first appeared in The Cape Rock (edited by Harvey E. Hecht).﻿
Posted by Poet Red Shuttleworth at 4:46 PM No comments:

I never said I was some trigger-quick,
matchless Lucky Luciano, Al Capone, or Dillinger.
You got to go a caliber extra in the crime shindig
to be Clyde Barrow or Miss Bonnie Parker,
but I pitched pennies with them.  I have a talent
for stealing hens and eggs, for driving Cadillacs,
and once rode steers at rodeos
as far north as Burwell, Nebraska.
I'm a common, decent Texas boy, though my looks
are swank enough for Hollywood, wild sure,
but until I met Clyde, my most daring adventure
was running around on Halloween, tipping outhouses.
I'm in the Dallas jail thanks to Mr. Hoover making me
Public Enemy Number One, your essential R.C. Cola thief.

John Wilkes Booth  (1938)
Between Post and Clairemont, there are,
for one peculiar mile, as many fence posts
as there are skinned wolves dangling off them,
over two-hundred nearly indentical grimaces.
I am no more Lincoln's assassin than you, friend,
but you have paid twenty-five cents to leer
at my arsenic-embalmed black flesh, to peek
up my khaki shorts, to ruffle my white hair.
I am John St. Helen from Enid, Oklahoma,
a lovesick suicide stuffed with straw.
My left leg is shorter, thus I am Booth?
I swallowed a B-engraved pendant for jealousy's
blue flame, so I am Booth?  But shake my hand,
place my palm upon your true love's breast.﻿
This poem is from a Red Shuttleworth poetry chapbook, Brief Lives.
Posted by Poet Red Shuttleworth at 12:00 AM No comments: 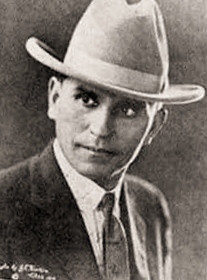 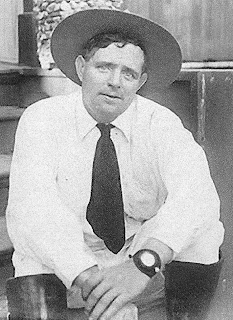 Wind cuts through the manzanitas
like a last breath.  London never knew
his father.  He feeds tag-alongs
at his redwood table in Glen Ellen,
employs dozens to build and sail
the flawed Snark.  Then the stone house
burns like folding money.  He cuts a slice
from a chunk of plug tobacco, offers it
to Charian.  A writer is just a fellow
going bare knuckles against the ghost of God.
London needs booze or a woman's legs twined
around him to get a night's warm sleep.
I invented debt.  He cannot choose
between Marx and Darwin: the wolf is alone. 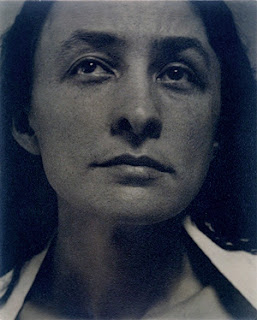 Just above the too-hot weight of low Texas sky,
there are bone-white bones, a steer skull
with a kindly smile.  Her Amarillo students
ask, Why do you dress like a man?
Alone, outside her rooms-by-the-week hotel,
she fights the impulse to dance the rhythm
of the wind.  A trainload of cattle jerks
and groans eastward.  Why do I like to kiss
the boys, tongue and hard, but decline turnabout?
And if the smoke from a lone cowboy's
campfire in Duro Canyon is golden-blackness,
heaven is a flower flattened between
textbook pages.  Loneliness is so lovely,
black vultures across Texas flat ground. 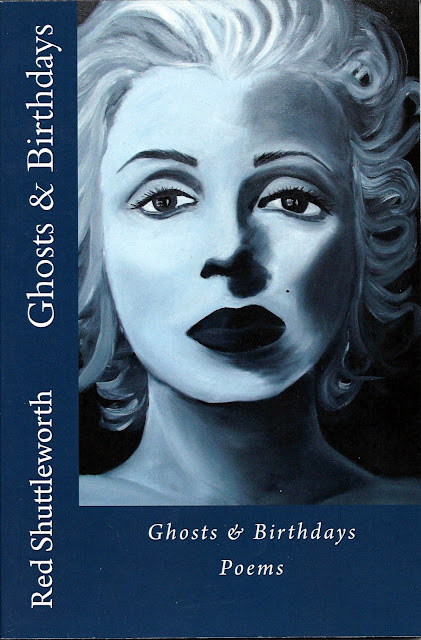 
Posted by Poet Red Shuttleworth at 4:22 PM No comments: 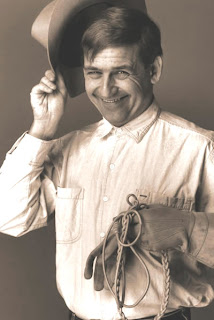 Think of bullhide boots left in the rain.
Or a lonely valley.  Will Rogers loved speed.
Nothing quite matched riding Soapsuds
off a moving flatcar, getting it perfect
on a first take.  There were other horses:
Dopey, Black Iron, and Seven Squash.
Think of a single engine plane failing
to gain altitude over an Alaskan lake.
The abyss smells like burning rope.
Rogers made us laugh with the truth.
Think of an Eskimo boy running for help,
his shadow lit by aviation fuel flames
until there is no shadow, only the crackle
of a lariat snaring the northern sun.