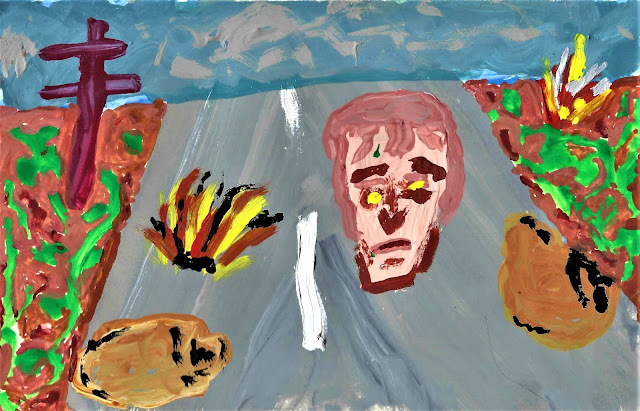 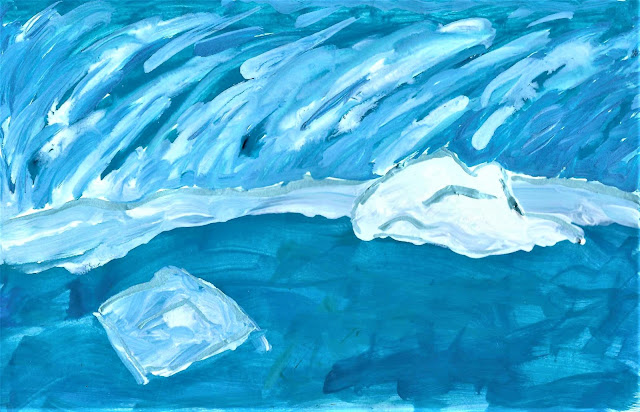 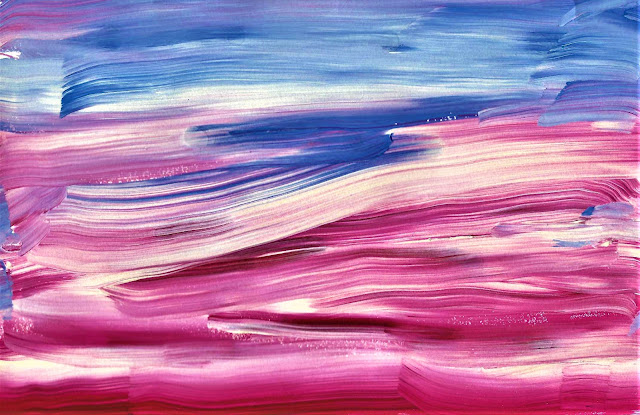 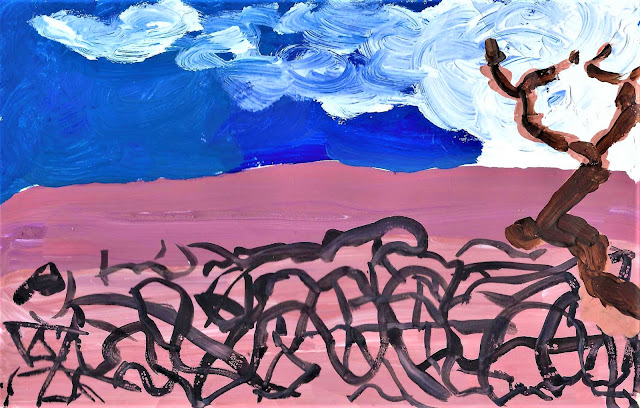 What Can Grow But a Tangle of Desert...
Trees from Beckett's Godot.... 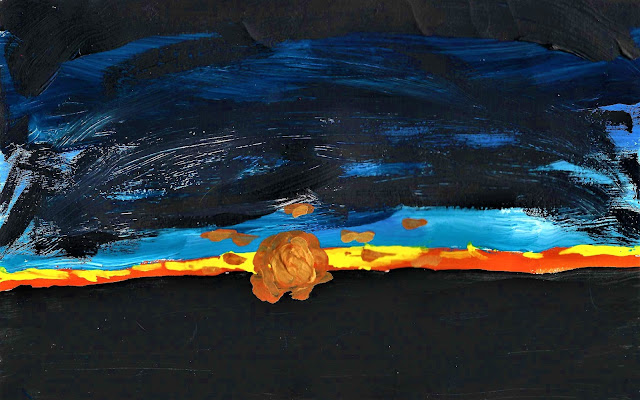 At Calamitous Sunfall, the Air Thick with Corrosive Smoke, Where Shall You Cling to Pathetic Life? 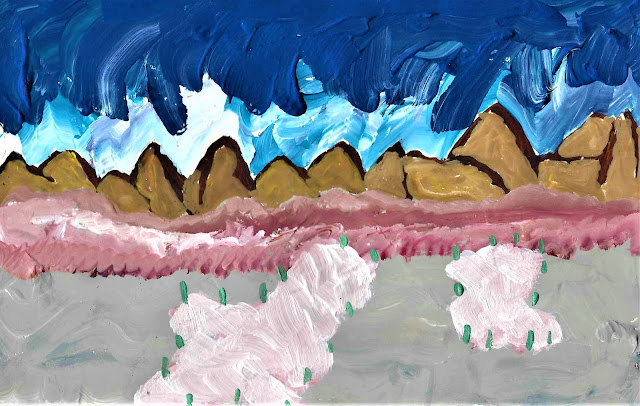 Face Climate Disruption with Enough Honesty and Courage to Act in Behalf of Our Earth!

Posted by Poet Red Shuttleworth at 5:48 PM No comments:

Western Writers of America is a Rotting Carcass on a Falling-Apart Pine Cart...Pulled by a Seven-Hundred No-Talent Scribblers in Online-Purchased Ol' West Dress-up.

It was a good idea back in the middle of the last century, Western Writers of America... a group to meet once yearly to drink and offer awards for decent-enough writing to scribblers in the paperback Western genre.

In the olden days. the WWA conventions were attended by publishers and author agents.  Books sold.  There was some money to be made by the likes of Elmer Kelton and Richard Wheeler.  Some greenbacks to be made by a few other writers as well.

Nowadays... WWA conventions are pretty much without agents and editors from book publishing outfits (save Wolfpack Publishing... nearly an in-house project from a couple of guys who must be retired California realtors).

So... what to do at conventions?  Someone came up with the notion that members (mostly gone-to-blubber) would get a kick out of parading in Ol' West get-ups.  Think: past middle-age fatty women stumbling forth in dance hall girl get-ups.  Now if that don't make you puke....

Me? WWA awarded my poetry book, Western Settings, their first Spur Award for Poetry in 2001.  So I went to the convention... to get the plaque and to see who might be pleasant to drink with... to see if there were really any writers in WWA.  I did meet Elmer Kelton that year.

So, urged by a former president of WWA who had played guitar behind Waylon Jennings a time or two, I joined the organization... ignoring what Jim Harrison had advised, Someone has to stay outside.

Spur Award, and my next pair of Spur Awards, informed the Literati that I was no longer literary... that I was somehow a cowboy poet... though I no longer owned any cows, nor rode ranchers' very nice horses at roundups.

But I stuck with WWA for quite some time, an optimist who thought that I was among new friends who knew how to read, who aspired to read better, who aspired to learn how to write even to their limited talents.

A few years ago, I ran afoul of a number of no-talent and half-talent members.  I had been noting that the Western Writers Hall of Fame was an accumulation of mediocre writers, honored with a dusty closet in a semi-museum in Cody, Wyoming.  The WWA Writers Hall of Fame, to this very day, excludes Jim Harrison, William Kittredge, Cormac McCarthy, Thomas McGuane, Larry McMurtry, Sam Peckinpah, Sam Shepard, Ian Tyson, Hank Williams, Paul Zarzyski....  Hell, it would be a great embarrassment to be inducted into WWA's Western Writers Hall of Fame.

The harsh truth is that almost all WWA members resent the Literary Western, whether Dalva by Jim Harrison, Sam Shepard plays, or Cormac McCarthy's Blood Meridian.  The WWA scribblers are justifiably insecure about their lack of talent and the piss-poor works they generate with great ambition on zeal. Every so often a WWA scribbler will write in Roundup (the house organ... competently edited by Johnny D. Boggs, a good, though not a great writer) a weak attack on his or her betters in the Literary world.

Where I really pissed off the dowdies and limp-dicks of WWA when when, on the Facebook site, I tried to engage the publishers of Wolfpack Publishing with the notion that they could field a better roster of writers... if only recruiting young creative writing MFA writers at the University of Montana... or just publishing oral novels, oral autobiographies of the nice girls who work at Mona's Ranch in Elko.

So I got banned from the Facebook WWA page, though it was never clear who banned me.  No agon was needed... no debate... no self-questioning about the direction of WWA.

WWA, since I had first joined in 2001, has bloated from about 450 members to over 700 members.  That might be a sweet, large increase in membership fees (to employ a couple of folks), but it meant taking in an even lower level of genre scribblers... the scribblers of romance novels.

So a group of members (Monty McCord, Vicky Rose, Quackgrass Sally, and Bob Yoho) put together a half-literate letter of complaint... to get me expelled from WWA membership.

So it got hilarious:

The letter of complaint noted that I felt the leadership of WWA were the products of feces and intestinal gas.

The letter reminded us all that I felt that one publisher of Western fiction caters to those who can read no higher than the 9th grade level.

The letter of complaint said I actually used "cuss words" to note that the WWA leadership was composed of mattress mice and bed bugs.

The letter of complaint, said that I accorded more literary skill to my Irish Wolfhound than to just about everyone in the WWA membership. 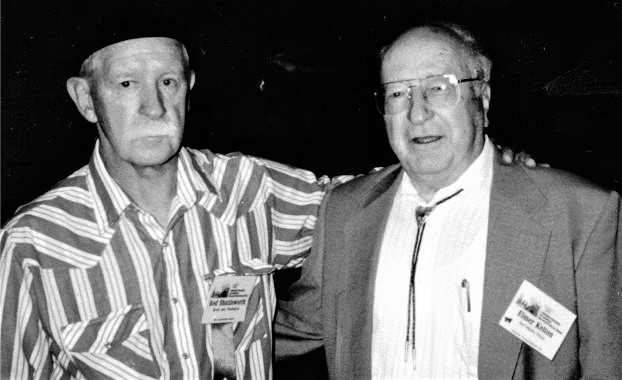 I never got to know Elmer Kelton well, but I liked his writing, some of it, and he was a good man... a level above the current WWA mob of ass-hats scribblers who are envious of Literary writers.

WWA (Rotary meets sewing circle) should abandon interior censorship... or admit that it is aligned (in sensibility) with Jim Jong-Un, Dr. Bashar al-Assad, and others who despise free discourse.

WWA honoring Romance novels, I noted, according to those who wished me dismissed from membership, was like honoring tooth rot.

So WWA sent me a cease and desist letter.  I laughed..  Then the leadership expelled me from membership in WWA.  I was so happy to receive this award, that I got that letter professionally framed and hung it in my home gym.

As for WWA finances, the IRS should investigate.  I was a member for nearly twenty years and never once saw an independent audit.

And one of the signatories of complaint was one Quackgrass Sally.  No one could produce her bibliography, so I suspect that she received her membership thanks to a friendship with WWA's executive director.  What has Quackgrass Sally actually written that would entitle her to a full membership, much less the honor of being the Spur Awards Chair for a few years... bumbling that task?

Western Writers of America is carted onward... a rotted body... onward to the next meeting of tattered tents... few if anyone able to write above the 9th grade level.

And I am happily outside WWA.  It has taken me a couple of years to write this blog entry.  But here you have it.  As for the erstwhile friends from my WWA days, I call them all out as chickenshit cowards and moral failures.

Posted by Poet Red Shuttleworth at 5:18 PM No comments:

Paintings for Our Time 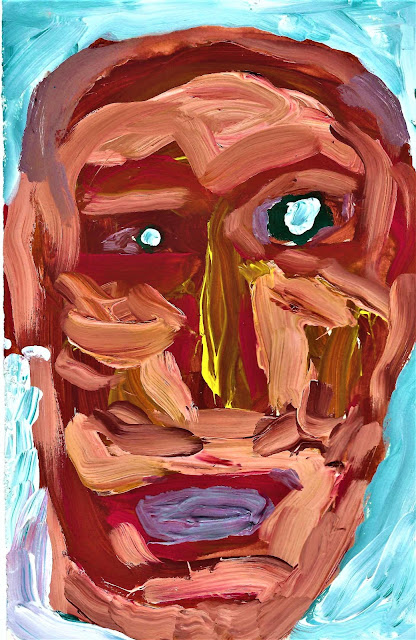 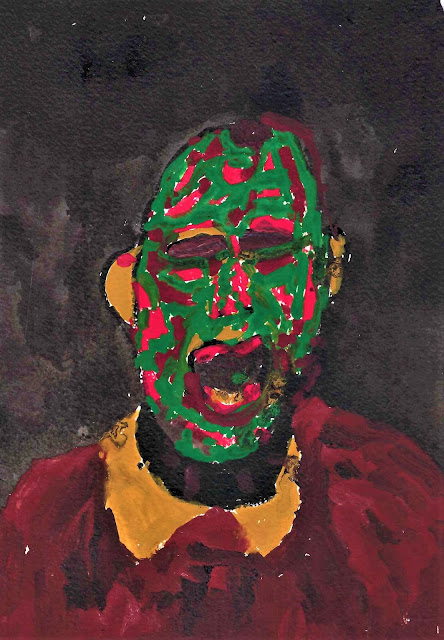 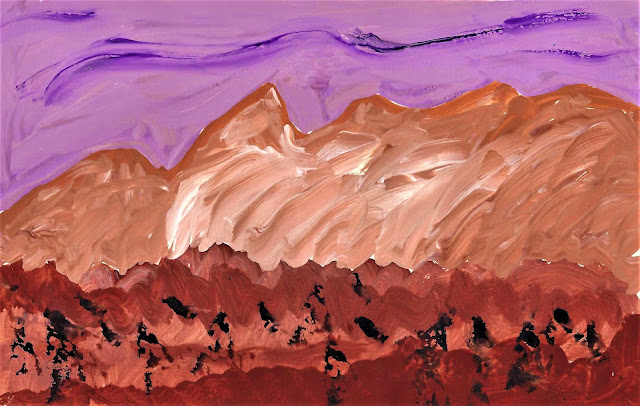 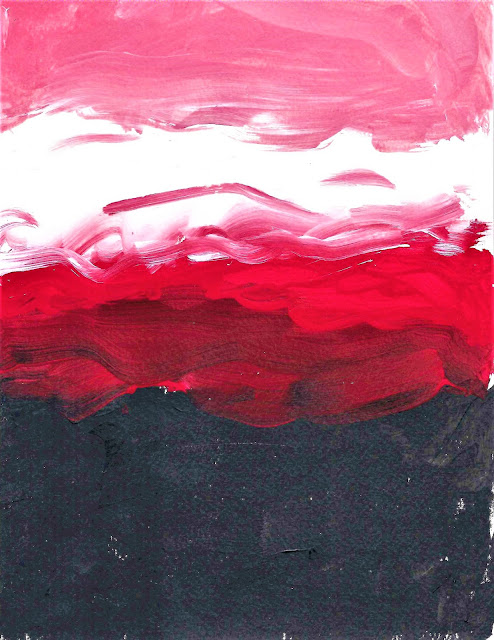 A few Red Shuttleworth paintings are available for purchase.  Not particularly cheap.

Posted by Poet Red Shuttleworth at 2:42 PM No comments: